At the deepest level, Agile Lean Leadership (ALL) is a mindset that governs how we confront challenges and opportunities, particularly when working with others in organizations.

It begins with the realization that much of what we deal with today is in the complex domain where only fragmented knowledge is available, but we still have to act. We are much less in control than we would like and our customary process with big upfront plans and budgets is destined to failure.

Although “top-down” management has prevailed since the Industrial Revolution, it has always been more natural for people to solve complex problems by sharing ideas and cooperating. Now that the Industrial Age is drawing to a close, it is time for new (or rather old) ways to think about making organizations work optimally.

Agile Lean Organizations work in self-organizing teams where each member is a valued contributor, using their skills for the collective goals of the team. They have autonomy, a sense of purpose and license to develop their own intrinsic motivations on the path to mastering new skills and meaningful accomplishments.

Read more about Agile Lean Leadership on these pages:

The following are the leadership values and principles that drive Agile Lean Organizations.

The values represents the deepest answers to the “why” question, we should share these with the people we work together with in the organization.

An organization must have an aim to work towards. The aim has to be bigger than anyone individual and it has to be more than just making money. If it is going to be useful to bind people together in the long term, its stakeholders must find its purpose worthwhile. The purpose will reveal the organization’s own values.

Sustainability in all things

An organization must have a long term view, more or less on all things. This implies being able to survive for a long time, removing waste, avoiding draining scarce resources, building up relationships and human capabilities for the long haul – not wearing them down.

Resilience in all things

An organization must expect change and unpredictability. The structures and communication channels must be capable of responding fast to new challenges and opportunities. Everybody must be on the lookout for new knowledge and disciplined reflection must be in place to make sense of things.

An organization must serve its customers, employees, stakeholders and society at large with respect. That includes giving people psychological safety and allowing them to grow, develop and have joy and pride in their work and contribution.

The principles are reminders of how to decide and behave in order to nudge toward the values.

A clear and worthwhile purpose

Respecting and developing people and relations

The Team or Circle

In ALL we use Teams as the operating unit. Teams are cross-functional, designed with high internal coherence and low external coupling, so the can operate largely on their own, like a small business.

The Team concept is taken from the Classic Scrum Team, which we have generalized and called it a “Circle”. The role of Commanding Officer (CEO like) is equivalent to the Product Owner in Scrum, looking out towards customers competitors and society at large. The Executive Officer (COO like) is equivalent to the Scrum Master in Scrum. The cross-functional, self organizing Team has the skills to deliver whatever is on the Circle’s Backlog. For further information about Scrum and Agile look here…

Each Circle has a Manifest and Relationships with other Circles (could be Suppliers and Customers). The Circle maintain its Manifest, it shows what it does, who the members are, who they serve and their rules of engagement. This is transparent to the whole organization and can be modified periodically as circumstances change.

When a Circle has relationships with other Circles, they can “Delegate” deliverables to each other. These are the channels along which value flows in the Value Stream. A relationship also has a manifest, that documents the expectations of the two sides of the delegation.

Some Circles may choose to work with Kanban or a combination of Scrum and Kanban. Under all circumstances are they expected to follow the practices of iterations (or cadences) in planning, review and retrospective. They are also expected to focus on making their work as transparent as possible.

The Organization – Team of Teams

When we start putting Circles together in an organization new patterns arise. We normally use a drawing like this to explain it:

Customer Circle Manifests describe who they are, their values and requirements.

Formed with the customer in mind, Peripheral Circles are small Teams comprising the skills required to best serve customer needs. It is preferable to keep teams small, sometimes it is better to get help from other Teams by delegating deliverables rather than expand individual teams beyond their optimal size. Sometimes it is also helpful, to scalie up a Circle/Team.

Center Circles serve other Circles in the organization (typically in the Periphery). They perform services like marketing, admin, HR, legal support and platforms or services common to multiple products; their “customers” are internal to the organization. When external suppliers are involved they may have dependencies or interactions with them too.

Each Circle has a Manifest which describes “Why” it exists, “Who” it serves and “What” it does. It should include information about the Circle’s activities, artifacts and terms of delivery.

Circle architecture is a collaborative process that often takes several iterations before the final design is agreed. It requires the involvement of everybody, not just senior managers.

Level 2 Circles exist to coordinate interaction between Circles and to deal with issues, conflicts and opportunities that are either unexpected or beyond the scope of other Circles. They fall into the categories described below. 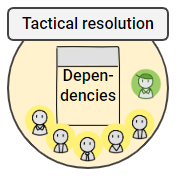 As the name suggests the TRC is designed to resolve tactical issues which cannot be addressed by individual Circles. It will typically involve an XO and team members, some representing other teams. They meet periodically to discuss pan-Circle issues such as dependencies, impediments and planning matters. In Scrum, this is known as the Scrum of Scrums. 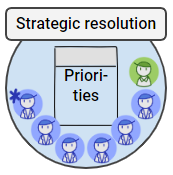 The SRC is designed to resolve strategic issues, perhaps relating to customer requirements, prioritization, product specifications, resource issues, or other business matters that cannot be addressed by other Circles and therefore need to be escalated.

The SRC is composed of COs or Product Owners of the Level 1 Circles in question and includes an XO. One of the COs may be designated as more senior with the power to break deadlocks. 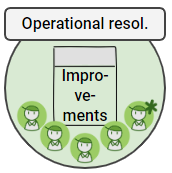 The ORC is composed of XOs (Scrum Masters in Scrum) who meet to resolve issues related to process, impediments and improvements that cannot be resolved at the Primary Team level. Decisions are made from an organization-wide perspective so may have a bearing on more than one Circle. As with the SRC, one of the participants has the power to be the final arbiter.

In traditional hierarchical organizations those with similar skills or competencies were grouped in the same departments. However, Team-based organizations designed to work in the Complex Domain, are cross-functional and instead of being focused on functional grouping, concentrate on the value stream and the delivery of goods and services to customers.

The downside is the loss of comradery and the sharing of ideas that sometimes comes when people with similar interests and get together.

The solution is Secondary Circles, where Team Members from Primary Teams meet to discuss cross-cutting concerns within their special area of skill and expertise. This is indicated in the figure above with the dashed orange line.

This is a well known concept in many agile implementations and has been called Communities of Practice (COP) or Guilds. Sometimes these Circles start spontaneously because of a need in the Primary Circles and sometimes they are formalized because they provide valuable input.

There are many details that need to be addressed, some not so different from classic organizations and some quite different:

Agile Lean Leadership also has a host of Artifacts, templates, workgroup methods and other practical things that can be used to support the practices, principles and ultimately the values.

They are not unique to ALL, but help a lot when implementing it. Some of the more important ones are: